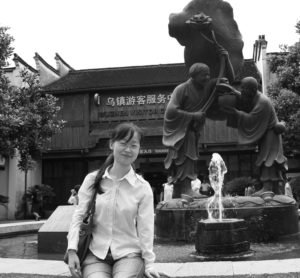 Having studied physics in Shanghai, German studies with a focus on comparative literature, and sinology in Heidelberg, Ruqing Fei is now a PhD student researching the cultural characteristics of mathematical texts in Imperial China. By making comparisons from different aspects, that is, original texts in natural Chinese language with their modern interpretations in formulas, original texts before the influence from Western mathematics with those from thereafter, original texts about algebra with those about synthetic geometry, she aims to identify and characterize the non-mathematical arguments, which were nonetheless used as arguments in the Chinese mathematical texts and thus culturally relevant, and to figure out why they were used instead of logical, mathematical ones: Is it because of the lack of required knowledge? Or is it because of the natural language which does not allow complicated derivation without modern algebraic equations with symbols? Aside from her research, she’s giving a voluntary theater course for the students of Sinology at the Friedrich-Alexander University Erlangen-Nürnberg (FAU).